IELTS Cue Card: Describe a new public building you would like to visit

Which is more important: preserving old buildings or building new ones?

What kinds of public buildings do people like to visit in your country?

What is most important for a public building: design, location, or facilities?

Do you think the appearance of a building is important?

I’ve always been an aviation geek, so I’d like to visit the new airport that’s being built in Berlin.
This airport isn’t open yet, but has been under construction for donkey’s years now, far longer than the architects and planners originally anticipated. It’s become something of a laughing stock among Berliners who have been promised this new transportation hub for forever and a day.
One of the reasons why it’s been so delayed has been due to technical problems with the building. For example, the fire detection system was found to be faulty by the fire department who were doing an inspection. The problem proved to be anything other than an easy fix and I believe the entire system had to be removed and replaced.
I think one of the reasons why this is on my list of places to visit is because I want to see if it lives up to all the hype, or whether it’s just a run-of-the-mill airport. My guess is it’s going to be the latter. Obviously the experience of travelers, especially frequent flyers has been factored into the design, so I’d expect it to be very easy to navigate, quite modern, and with a large number of shops and amenities to help people pass the time while they’re waiting for their flight.
There have been quite a few new airports that have been built around the world in recent years, and I’d like to visit some of these other ones just to have a wander around and see how they stack up to the more run-down airport I usually fly from.

Aviation geek (noun – خوره‌ی موضوعات مربوط به هواپیما)An aviation geek is someone who has a love for planes, airports, and anything about aviation.

Example: I’m such an aviation geek and get excited every time I see an unusual plane.

Example: The new school is under construction and it should be finished in a year.

Example: We’ve known each other for donkey’s years.

Laughing stock (noun – فرد یا چیز مسخره)Someone or something that seems silly or stupid, especially by trying to be serious or important and not succeeding.

Example: He was the laughing stock of the company when he announced his plan.

Example: We’ve been driving for forever and a day and we’re still not there yet.

Example: That concert really lived up to the hype. It was great!

Run-of-the-mill (adjective – معمولی)Something that’s ordinary and not special or exciting in any way is said to be run-of-the-mill.

Example: He gave a fairly run-of-the-mill speech. It was really disappointing.

Pass the time (idiom – وقت کذراندن)If you do something to stay busy while waiting for something, you’re passing the time.

Example: I watched videos on my phone to pass the time while waiting for my flight.

Stack up (phrasal verb – مقایسه کردن)To stack up means to compare or measure against something else.

Run-down (adjective – داغون و قدیمی)Something that’s run down is in a very bad condition. It could be a building or a neighborhood.

Example: The buildings in the south of the city are really run down. I’d hate to live in that run down area.

Which is more important: preserving old buildings or building new ones?

I’d say both are equally important.
There’s been a lot of focus in recent years on maximizing land usage. As population density increases, the value of every square meter has skyrocketed, and this has led to some older buildings being torn down and replaced with a glass and concrete monstrosity.
Obviously we can’t just preserve an old building for the sake of it, and there usually has to be a good justification. Perhaps the building has some historical significance, or perhaps there aren’t the funds to replace it with something new, but there is money available to renovate or repair it.
The town I come from is a small fishing village that also has a castle ruin. It hasn’t experienced a lot of population growth over the years and so there hasn’t been much pressure to build new buildings. As a consequence, it’s ended up looking like it did hundreds of years ago with quaint old buildings that have proved to be a tourist attraction.

Population density (noun – تراکم جمعیت)The number of people living in a unit of area (such as a square kilometer).

Example: This part of the country has a high population density.

Example: Prices are skyrocketing in the south.

Example: That new office building is a real monstrosity.

Ruin (noun – خرابه)Ruins are the remains of something that’s been destroyed.

Example: The temple ruins are now a tourist attraction.

What kinds of public buildings do people like to visit in your country?

There are a lot of different kinds of public buildings, and often it depends on the individual.
Children are more likely to visit the library and they’ll certainly be going to their school on an almost daily basis throughout the year.
I suppose post offices could also be considered to be public buildings, but as people are sending fewer and fewer letters, these are becoming a thing of the past.
Shopping malls are the most common public place people visit. They’re convenient because people are able to compare different products they’re interested in buying without much hassle, or they’re able to go window shopping if they find themselves with some time to kill. This is probably why they’re springing up like weeds all over the city I currently live in. Right now the largest one is being expanded to almost double its size.

Example: Young people giving up their seat to an older person seems to be a thing of the past.

Example: I can’t face the hassle of moving again.

Window shopping (noun – تماشای ویترین بدون قصد خرید)If you go window shopping, you have a look at the things that are on sale without intending to buy any of them. You’re just having a look around.

Example: Most people in the mall are just window shopping and looking for somewhere to eat.

Example: I arrived at the airport too early and had some time to kill before my flight.

Example: New houses are springing up like weeds in this neighborhood.

What is most important for a public building: design, location, or facilities?

I think for the most part all three are important, but if I had to rank them, I’d say that its facilities come in first place. People go to a public building for a purpose, and if they can’t achieve their goals the beauty of the building as well as its location become somewhat irrelevant. For example, an aesthetically pleasing mall that has just a handful of shops is less likely to thrive compared to a mall that has hundreds of stores, but is located in an ugly building.
The location is in some cases the least important factor. Outlet malls and airports that are often located on the outskirts of a city are still visited in spite of the difficulties that most people face traveling to and from them.
I do believe it is important to to have beautiful buildings. I think just about everyone would prefer to live in a pretty environment, and architects seem to be paying attention to the façade with an ever greater frequency. They know their design is going to last for many decades, and they don’t want it to be a blight on the landscape.

Example: The new house across the street is aesthetically pleasing.

Handful (noun – تعداد کمی)A handful is a small number of people or things.

Example: She invited all her friends to the party, but only a handful of them turned up.

Façade (noun – نمای بیرونی ساختمان)The front of a building, especially a large or attractive building. Most words in English don’t use a ç with an accent, but this is an exception because it’s a French loanword.

Example: The new apartment building I’m moving into has a beautiful façade.

Blight (noun – چیز بد با تاثیر منفی طولانی مدت)Something that spoils or has a very bad effect on something, often for a long time.

Example: Those new buildings are a blight on the neighborhood and make it look terrible.

Do you think the appearance of a building is important?

As mentioned before, I do believe it’s important for buildings to be pleasing to the eye, however if cost is a concern, design may take a back seat.
I’ve lived in a city which has a lot of buildings that were constructed hastily and as cheaply as possible. From what I know, there wasn’t much time, nor much inclination to build beautiful buildings. They were designed and erected within months, rather than years, and a bare bones basic design was chosen.
Frankly I feel that a lot of those buildings should be demolished and replaced with something more up to date. Because they’re so ugly, people are also less likely to invest the funds necessary to keep them in a good state of repair and it is looking ever more likely that they will be replaced in the not too distant future.

Example: The movie’s special effects are pleasing to the eye, but the actors are terrible.

Example: I was sick last week, and work had to take a back seat while I got better.

Hastily (adverb – با شتابزدگی و عجولانه)Something that’s said or done in a hurry. If something is done hastily, it’s often done without much thought or care.

Example: I’m inclined to look for a new job.

Erected (verb – افراشتن)To build something, like a building, wall, or other structure.

Example: This building was erected in 1950.

Example: I don’t need all the details of what happened, just tell me the bare bones.

A good state of repair (idiom – در وضعیت مطلوب)This idiom means that something is well maintained, working properly, or otherwise in a good condition.

Example: It’s a beautiful house, and they’ve kept it in a good state of repair for decades despite the fact they’ve not lived there for a few years.

Example: We’re going to be moving to Spain in the not too distant future. 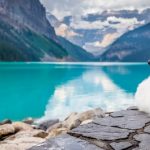 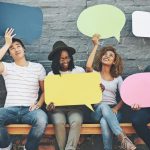